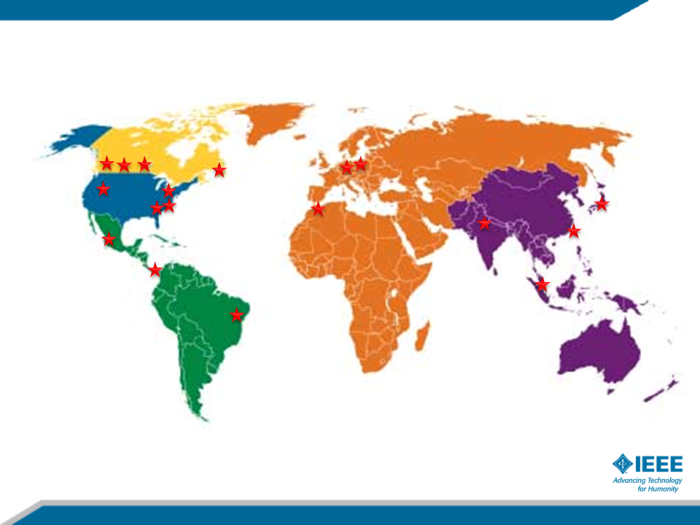 Barry and I served together on the IEEE Board of Directors when he was Vice-President for Member and Geographic Activities and next year the IEEE Secretary and I was the Region 8 Director (Europe, Middle East and Africa). During this time he was deeply engaged in improving the organization and operations of the IEEE. I was always impressed by his ability to quickly understand difficult issues, build diverse teams to address the issues, and ultimately bring everyone to consensus for the good of the IEEE. During his term as the Vice-President of Member and Geographic Activities, he developed the Regional Geographic Strategy which focuses on the unique circumstances and commonality of a local geographic region to provide relevant products and services to our members. He is absolutely passionate about providing increased value to our members, our profession and the public.

He is one of the most effective leaders I know and I am confident he will make an excellent IEEE President.

Barry and I were on the IEEE Board of Directors in 2008-2009 when Barry was IEEE Secretary and Chair of the IEEE Governance Committee. I saw Barry's commitment and passion to make the entire IEEE governance structure more efficient and effective. I've been an IEEE member for 43 years and as the world around us changes we must be willing to make organizational changes, or the organization will lose its relevancy to its members. As VP MGA Barry's Region 1-6 strategy included the Metropolitan Area Workshops (MAWs). I taught Smart Grid in the Boston and Atlanta MAWs in 2013 and saw the successful collaboration between multiple IEEE organizational units - another example of change instituted by Barry. My brother, Bob, a West Point graduate in 1975, recently retired from Procter & Gamble after a 33 year career, where he was P&G Chairman of the Board, CEO and President for the past four years. During Barry's 20 years at West Point he has served in a number of key leadership positions, excellent preparation to lead IEEE, the world's largest technical professional society.

Barry Shoop is an engineer’s engineer. He knows how things work and how to make things work. In IEEE, that’s exactly what he has done for all these years. I have long admired his leadership that I believe would be even more relevant and propitious for IEEE to deal with a range of global opportunities and challenges. Given his hands-on involvement from optoelectronics to out-of-the-box thinking, and policy making to professional development, IEEE needs precisely a leader like him.

I enthusiastically endorse Barry Shoop’s candidacy for IEEE President in 2016. Please join me in supporting him.

With his professional US military experience and his stints on the IEEE Board in various capacities, Barry Shoop has already demonstrated his ease working with and in large, often amorphous organizations of engineering professionals. His focus on involving the IEEE member in all facets of the organization has been transformational for IEEE and its members. His strategic vision for IEEE has not been developed in isolation because Barry Shoop knows how to ask the right questions at the right time. I've been a member and active volunteer with IEEE for over 25 years.

I think Dr. Shoop is the right person at the right time for 2015 President-Elect.

Co-founder and member of the Board of Governors, Intelligent Transportation Systems Society

When I got elected to the MGA Board as the Vice-Chair, Member Development for 2010, I had my apprehensions, as this was my first experience at the IEEE board level and wanted guidance in all respects. Barry was the VP of MGA and the first MGA retreat itself gave me the required momentum, as he was very clear with his vision and goals for MGA. He set his priorities but gave me enough space to integrate my inputs and ideas to my role. He also made sure that at every stage, we took the MGA staff along, which proved very helpful in achieving our goals for MGA.

I am sure, if elected as the IEEE President, Barry will lead the organization with set goals. I wish him success in the elections.

It is a pleasure and a privilege to endorse Barry Shoop as IEEE President Elect for 2015.

In 2013 the prestigious IEEE Haraden Pratt Award was given to Barry in recognition of his outstanding service to IEEE.

My personal interactions with Barry have been through volunteer work with the IEEE Board of Directors and IEEE Publications Services and Products Board. As a fellow volunteer I found Barry willing to appreciate complex goals. He listens respectfully and in turn can be trusted to offer carefully considered views. He is tactful, able to draw people together to achieve a common goal.

Barry Shoop embodies the key qualities that make him an accomplished leader and an outstanding candidate for President of IEEE (2016). I am proud to endorse him for IEEE President-Elect for 2015.